Allison Mondel and The Music, Life, and Legacy of Hildegard von Bingen

In this podcast, Amy Panetta has a conversation with Allison Mondel about the life, music, and legacy of Hildegard von Bingen, a powerful female spiritual figure of the middle ages! Allison Mondel is a highly versatile performing artist and visionary voice coach. She has been lauded by The Washington Post for her "ethereal soprano" and "spare, otherworldly radiance... a performance from across the centuries, full of distant and irresistible beauties.”​ She received her M.M. in Early Music Vocal Performance from the Longy School of Music where she discovered a new love and inspiration: medieval music. Allison has directed Eya since its inception in 2010, crafting programs representative of her artistic vision: to marry art (old and new) with spirituality. She is a notation and performance specialist of the chants of Hildegard von Bingen, and had the honor of singing Hildegard’s music at President Obama’s second Inaugural Prayer Service at Washington National Cathedral. She has offered workshops, classes, and lectures on Hildegard’s unique body of work and other diverse early music repertories throughout the east coast, midwest, and Ireland. In addition to her medieval performance and scholarship, she has also performed at the Boston Early Music Festival, Washington National Cathedral, Dumbarton Oaks, Irish World Academy at the University of Limerick, American University, Georgetown University, Harvard University, Manassas Ballet Theater, and others. Some of her most meaningful work has been in the teaching studio. She has taught singing for over 15 years, including Washington National Cathedral, Georgetown University, and her own private studio. A Transformational Voice Coach, Allison founded Sacred Voice Studios, a holistic teaching and coaching practice which reaches around the world, helping singers transform their relationship with their voice.

Intro Music from the album, "A Year In Ireland" by New Time Ensemble, Used with Permission.

To support the many hours that will go into this podcast, please consider donating. You may send a donation by clicking HERE. Thank you! 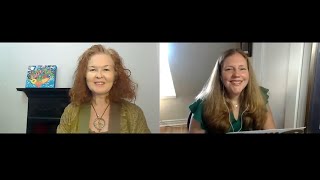 Celtic Spirituality and Shamanism for Our Times - An Interview with Dr. Karen Ward from Slí An Chroí